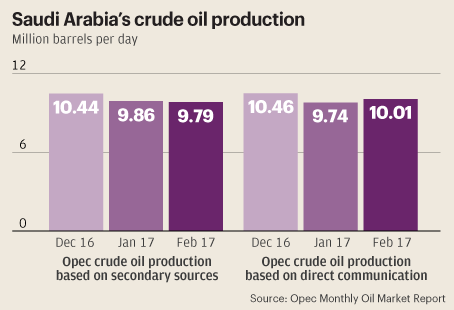 Opec and non-Opec countries last year pledged to reduce output by around 1.8 million barrels per day (bpd) as part of a concerted effort to curb a global oil glut.

Saudi Arabia “is committed and determined to stabilise the global oil market by working closely with all other participating OPEC and non-OPEC producers”, the energy ministry said in a statement.

An Opec report released earlier on Tuesday said that Saudi Arabia reported an increase in oil production for February, saying it pumped 10.011 million bpd last month, up from 9.748 million bpd in January. This is still in line with its Opec output target but spooked the market which assumed it is now prioritising its market share ahead of oil price support amid a rise in production from the US shale industry.

However, the energy ministry said the amount of crude it actually supplied to the market in February was 9.9 million bpd, down from 9.99 in January.

“The difference between what the market observes as production, and the actual supply levels in any given month, is due to operational factors that are influenced by storage adjustments and other month to month variables,” it said.

Kuwaiti Oil Minister Essam al-Marzouk, head of a committee overseeing the decreases in oil production, said last week that Opec compliance with the output reductions had exceeded the target because of higher Saudi cuts, but non-Opec compliance has been modest.

■ Comment: I’ll be back: oil’s price slump is tough to kill

■ Analysis: Why mood shifted in the global oil market – and might shift again

Archives
To perform the transfer operations with flexibility while keeping the working environment safe as our main objective.
GET IN TOUCH
Copyright NT Petroleum FZC. - All Rights Reserved